Living Polders is a research project funded by the Dutch Research Council (NWO) that seeks to contribute to the enhancement of restored flooding & controlled sediment management practices in the Ganges-Brahmaputra delta in Bangladesh. A case description of the project can be found on the NWO website.

Rather than being an obstacle, sediments provide a high potential for a building-with-nature approach, which works with rather than against the forces of nature. The benefits attributed to practices that acknowledge this potential include:

Bangladesh’s Coastal Embankment Project (CEP) combined the construction of embankments to decrease external flood risk and salinity intrusion with an infrastructure to drain internal excess water. Polders increased yields up to 300%, but also obstructed the flow of sediment-laden rivers during the monsoon. This caused catastrophic flooding and siltation of the river water system. The drainage function of the polders became blocked which caused vast areas to become waterlogged, leading to decreases in agricultural production, shortage of drinking water, and epidemics of water-borne diseases. Land subsidence caused additional soil salinization by capillary rise, and increasing flooding depths in polders after storm surges. Furthermore, conflicts grew between rice and shrimp farmers over letting in either fresh irrigation water in or saline water for aquaculture.

The continuation of the conventional polder system by authorities and donors, led to public protests. In 1990, local people breached the embankment of the Dakatia polder to restore the free movement of tidal flows, which eroded silt from the drainage channels, reduced waterlogging, and allowed sedimentation inside the polders, which in turn raised surfaces and increased the agricultural area. Ever since, Tidal River Management (TRM) – as this particular form of restored flooding came to be known in Bangladesh – has been practiced in the region, but with varying levels of success. 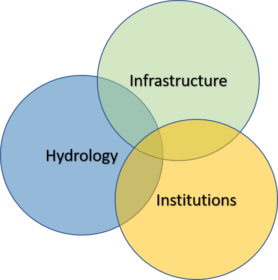 Restored flooding practices potentially provide solutions to many interrelated problems at different scales. However, the full potential of TRM has not yet been reached. By applying an integrated approach that recognizes the importance of hydrological, infrastructural and  institutional factors, the project seeks to contribute to the creation of living polders where man and nature can co-exist.